I'll be in NYC tomorrow (Sunday) through Thursday morning. I've talked to a couple people already, but if anyone else wants to get together/hang out/play games/have dinner/etc. etc. let me know!

Suggestions for current exhibitions I may not know about would be awesome, too.

Someone who was visiting SF, possibly staying with me, went to Amoeba Records but left their haul of LPs behind. This may have been months ago.
Are they yours? Do you want them? Do you know somebody that might?

There is a shower in my future, and it shall be glorious as it was foretold by the Ancient Oracle: for one day there shall come a man, covered in the dirt of his toil, as all of us are covered in our own, and he shall shower for our soils and all shall be cleansed: and you shall know that man is the lord!

Inspired by this Ars Technica review, I had to get Snow Leopard and try out the new programming APIs myself. All I can say is: Easiest. Concurrent. Programming. Ever. And this is in C! Running this pegs both cores of the CPU in my MacBook even though I didn't have to care or specify how many available cores there were. "dispatch_apply" is the GCD equivalent of a "for" loop. The magic "^" denotes a "block" — the Apple version of an anonymous delegate or inner class. (This is C, though, so the variables accessed inside the block from outside must be static. There is another API that lets you pass arbitrary data in as an argument to your block to get around that.)

On July 4th I was challenged to make a drink with Limca, a lemon/lime/ginger soda from India. People liked it enough I made three batches. I thought up a name tonight, and thought I should write down the recipe before I forgot. If I can manage to get my hands on some Limca of my own, perhaps I will take

dr_memory’s suggestion and make Limca a follow up challenge to my original kombucha challenge for the Beretta bartenders. I don’t think I’d try to make this there myself but maybe give them the recipe to try after they gave it a shot on their own.

Crush the juice from the apple over ice in a shaker. Toss the flesh in, too. Bruise some of the rosemary and put in shaker. Add the gin, vodka, and Limca. Shake vigorously until very cold. (Do this over the sink because you'll have to let the CO2 out. You’re flattening the drink a bit on purpose.)

Fill an old fashioned glass with ice. Strain mixture into glass with a very fine strainer. Taste. Top off the glass using Limca if it is too bitter or soda water if too sweet. Garnish with fresh rosemary.

I was stressing out over my photo library. It seemed like Aperture had lost track of thousands of photos. I was so confused I went to the Apple store to get help, and they managed to help me with one problem, but that only solved the mystery of a few of the missing photos. The remainder, Aperture was convinced, were located on a volume called "NIKON D80." This led the Apple store guy to suggest I'd erroneously "imported" all those images off my camera without actually moving them off my camera which I found inconceivable and horrifying. But truly when I searched every drive I had for those filenames I continually came up empty. Then this weekend I fired up my old Mac on the off chance that these images were somehow hiding on a drive I'd never copied. Know what? I found some of them, buried in iPhoto libraries. I thought I'd solved the mystery and joyously began copying things around, making space, and trying to convince Aperture I'd found the missing images. It wouldn't believe me, and despite crazy manipulations with symlinks, loopback filesystems, voodoo dances, (and Aperture mysteriously crashing when I tried to reconnect certain images,) I thought I was going crazy. And then I noticed that SOME of the directories from inside those projects were STILL missing. I noticed almost all the problematic projects were imported iPhoto projects and wondered if there was a problem specifically with them. I was right! I finally realized where the images really were: on another drive, in a directory full of iPhoto libraries that Spotlight doesn't search inside of. (I'd used unix tools on my old Mac since I couldn't use Screen Sharing on the old OS.) The other thing that threw me is Aperture's schizophrenic way of treating iPhoto projects: it gives the "real" OS path of files in some places and the "iPhoto" path (involving event names and rolls) in others, and that is what breaks reconnect.

Unfortunately, I'd left that hard drive connected to my computer at work. (It has my music on it.) Ludicrous chains of technology to the rescue!

With this setup, rebuilding the Aperture library (command-option as it loads) magically reconnected every missing file that was left, as far as I can tell.

I still don't know how it decided these libraries were on "NIKON D80" or how I can convince it otherwise so I don't have to execute
before starting Aperture.

On a side note, I discovered a ton of photos I never imported and lots of old documents I never pulled off of my old Mac! Should be fun to sift through later.

I haven’t been. Planning on going with

beckastar if she’ll have me.

This post needs facebook/twitter/lj auto-crossposting. Perhaps this could be my first iPhone or Python project…

May 13th 2009 (the last day of my trip to the east coast, more or less on my way to the airport) I stopped at 7th Ave and 48th St in Manhattan to get a picture of myself with the Sims 3 billboards. 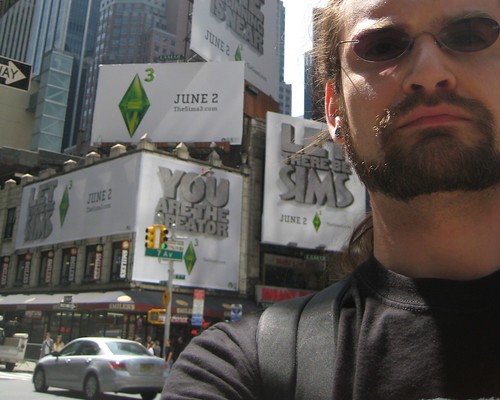 Why yes, I am the creator, now that you mention it. (One of them, anyway.)

I put out four more boxes of stuff today — two boxes of dotcom t-shirts and other assorted clothing, some building hardware, RJ-11 wallplates, cables, and other odds and ends. When I went down to check on it, at first I thought a few things had been left, including a copy of The Sims 2 and some IKEA lighting units. I felt a little insulted, actually.

Until I realized everything actually was gone, and they’d just left behind the empty packages after extracting the contents.

I checked today: my Xbox has 166 downloaded tracks for Rock Band. That’s something in the neighborhood of $250 worth of DLC. Cheap given the amount of awesome, but still a dramatic figure. (Plus, uh, 80 or so for RB2 and 50 or so from RB, that’s about 300 tracks total. RB3 better have the ability to save playlists and mark favorites.)

dr_memory’s name on them. Others (like Belly and Screaming Trees) hearken back to my teenage years. There’s some more Journey, Stone Roses, Soundgarden, The Shins, the entire Texas Flood album, a bunch of Franz Ferdinand including Take Me Out, and Emily’s pick of the day: Smooth Criminal (the A.A.F. version).

We should play again soon.

(Oh, on a side note, listen to Danger Mouse’s new album!)
Collapse